Streptococcus salivarius M18 (BLIS M18™) is a bacterial replacement probiotic specifically derived from the oral cavity and designed for use in the oral cavity. S. salivarius are the most numerically predominant bacteria in the oral cavity and populations of them are established in the mouth, nasopharynx and intestinal tract within hours of birth.1 A number of studies have associated S. salivarius that produce anti-microbial substances with protection against the pathogen Streptococcus pyogenes that causes strep throat.2 BLIS M18 while producing antimicrobial molecules that protect against Strep throat, also has broader inhibitory activity against bacteria associated with dental caries and gingivitis.

BLIS M18 has a number of advantages over most normal probiotics because it produces four potent antimicrobial proteins called Bacteriocin Like Inhibitory Substances (BLIS). These proteins are called salivaricin A, salivaricin 9, salivaricin MPS and salivaricin M. Salivaricins A, 9 and MPS have significant inhibitory activity against bacteria that cause sore throats and are relatively common amongst S. salivarius (approximately 10%). Salivaricin M however appears to be uniquely produced by BLIS M18 and has broad inhibitory activity against dental-caries, gingivitis and periodontal disease associated bacteria such as Streptococcus mutans and Actinomyces viscosus (Table 1). This sets it apart from other probiotics and targets its specific activity to a dental application. However, as can be seen from the inhibitory spectrum, there is a huge potential for further applications such as the prevention or alleviation of upper respiratory tract infections. 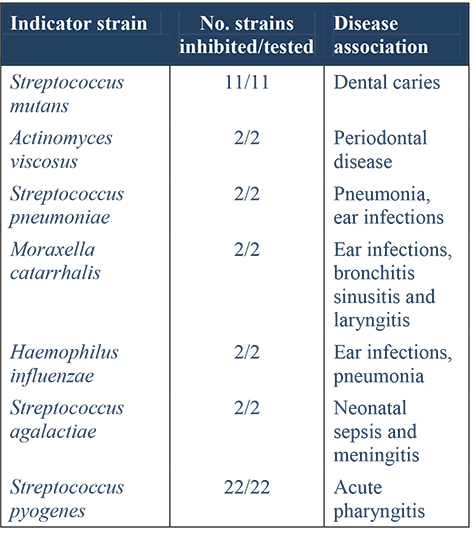 What are the health benefits of M18?

BLIS M18 has been shown to be effective at killing S. mutans, a leading causative agent of tooth decay, during laboratory based trials (Figure 1). Bacteria responsible for the initiation of dental caries often produce lactic acid from dietary carbohydrate. This degrades the tooth enamel and dentine which can lead to cavities and eventual tooth loss. BLIS M18 has been shown to produce the enzyme urease which can release ammonia in saliva helping to neutralize the acid produced by the cariogenic bacteria.

The School of Dentistry at the University of Otago in New Zealand performed a double blind placebo controlled clinical trial with BLIS M18 in children aged 5 to 10 years who had experienced dental caries (at least three restorations), had high levels of salivary S. mutans (an indicator of caries potential) and had no natural BLIS-producing S. salivarius.
Treatment was either two M18 or placebo lozenges daily for three months with 50 subjects in each group. Subjects were monitored at regular intervals for their levels of salivary S. mutans, soft tissue health, gingival health and plaque scores. At three months, the plaque scores were significantly reduced in the M18 group, and for those subjects that colonized well with M18, their salivary S. mutans levels were also reduced (Figure 2).

Figure 2. Average salivary S. mutans levels over the course of a BLIS M18 trial. Final treatment was at 90 days.

A large number of pathogenic microorganisms are associated with oral inflammatory diseases such as gingivitis and periodontitis. The effect of BLIS M18 on pathogen-induced pro-inflammatory cytokine expression in gingival fibroblasts was measured. When incubated alongside pathogens such as Porphyromonas gingivalis, Aggregatibacter
actinomycetemcomitans and Fusobacterium nucleatum, M18 was found to significantly inhibit the pro-inflammatory cytokine expression commonly associated with gingivitis

BLIS M18™ is a probiotic that is both sourced from, and designed for use in the oral cavity. Multiple studies have determined that S. salivarius M18 has important influences on the human oral cavity including: i) a reduction in plaque levels on teeth during regular consumption of BLIS M18; ii) downregulation of cytokines associated with inflammatory conditions such as gingivitis and periodontitis and iii) the ability to neutralize acid produced by cariogenic bacteria.